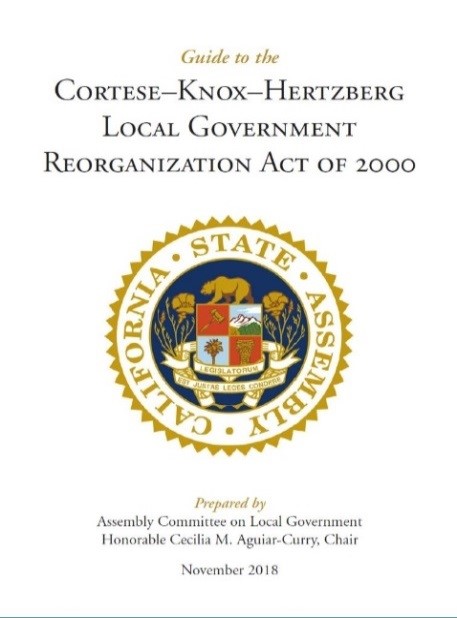 The State of California delegates a broad range of growth management duties and responsibilities to LAFCOs in all 58 counties through the Cortese-Knox-Hertzberg Local Government Reorganization Act of 2000.    This statute empowers LAFCOs to regulate and plan the establishment, expansion, and realignment (consolidations, mergers, etc.)  of cities and most special districts and their municipal services with community needs.    The statute similarly entrusts LAFCOs to achieve appropriate balance in accommodating new growth and development while protecting agricultural and open space resources from their premature conversion.    This includes – pertinently – recognizing that providing housing for persons and families of all incomes is an important factor in promoting orderly development and essential to the social, fiscal, and economic well-being of the state.   Additional details follow.

LAFCOs’ principal regulatory responsibility date back to 1963 and involves approving or disapproving all jurisdictional changes involving the establishment, expansion, and reorganization of cities, towns, and most special districts in California.    LAFCOs are also tasked beginning in 2001 with overseeing the approval process for cities, towns, and special districts to provide new or extended services beyond their jurisdictional boundaries by contracts or agreements.    LAFCOs also oversee special district actions to either activate new service functions and/or classes or divest existing services.    LAFCOs generally exercise their regulatory responsibilities in response to applications submitted by affected agencies, landowners, or registered voters. Recent amendments to State law also authorize and encourage LAFCOs to initiate jurisdictional changes to form, consolidate, and dissolve special districts consistent with community needs.  A summary of all regulatory responsibilities follows.

LAFCOs inform their regulatory actions through two central planning responsibilities: (a) making sphere of influence determinations and (b) preparing municipal service reviews.  Sphere determinations have been a core planning function of LAFCOs since 1971 and serve as the Legislature’s version of “urban growth boundaries” with regard to cumulatively delineating the appropriate interface between urban and non‐urban uses within each county.   Municipal service reviews, in contrast, are a relatively new planning responsibility enacted as part of the comprehensive rewrite of LAFCO law in 2001 and intended to inform – among other activities – sphere determinations. The Legislature mandates, notably, all sphere changes as of 2001 be accompanied by preceding municipal service reviews to help ensure LAFCOs are effectively aligning governmental services with current and anticipated community needs.  A summary of all planning responsibilities follows.